The Ascension and the Two Witnesses Connection

In Acts 1:6-7, 9-11, the disciples see Jesus taken up to heaven and an angel tells them that Jesus will return in a similar way. Was Jesus seen rising up to heaven before coming on the clouds in judgment in A.D. 70?

The Ascension and the Two Witnesses Connection 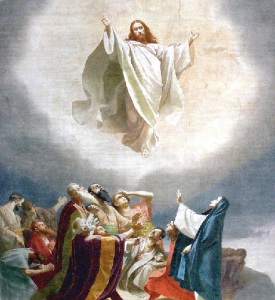 6So when they met together, they asked him, “Lord, are you at this time going to restore the kingdom to Israel?” 7He said to them: “It is not for you to know the times or dates the Father has set by his own authority.

A Preterist Interpretation, Exposition and Commentary of Acts 1: First Century Israel was “A Wicked and Adulterous Generation.”

Israel was expected to be “a kingdom of priests and a holy nation (Exodus 19:6).”  Yet first-century Israel was “a wicked and adulterous generation (Matthew 12:39).”  The Jewish historian Josephus agreed with Jesus’ assessment.  Concerning the perceived wickedness of his first-century contemporaries, Josephus penned the following: “[N]either did any other city [Jerusalem] ever suffer such miseries, nor did any age ever breed a generation more fruitful in wickedness that this was, from the beginning of the world.”1  When the disciples asked Jesus when He would restore the kingdom to Israel, the kingdom referred to here is the Kingdom of God.2 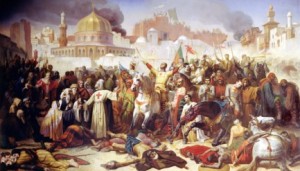 Signol, Emile. Taking of Jerusalem by the Crusaders. 1847

Preterist Bible Commentary on Acts 1:6-7: The Kingdom of God was restored to Israel when it became a Christian Nation in the Thousand Years between the Jewish War and the Crusades.

According to Deuteronomy 28:63, if the Israelites turned their backs on God, God promised to remove them from the land.  Interestingly in the 1000 years after the second coming and the concurrent war with Rome, Israel grew to become almost exclusively Christian just as it had been predominantly Jewish throughout its previous history.3  See the preterist commentary on Revelation 20.  I believe the fact that Israel grew to become a Christian nation during the thousand years between the Jewish War and the crusades was God restoring the kingdom of God to Israel in fulfillment of Acts 1:6.

9After he said this, he was taken up before their very eyes, and a cloud hid him from their sight. 10They were looking intently up into the sky as he was going, when suddenly two men dressed in white stood beside them. 11“Men of Galilee,” they said, “why do you stand here looking into the sky? This same Jesus, who has been taken from you into heaven, will come back in the same way you have seen him go into heaven.”

Here the disciples witness Christ’s ascension into heaven.  Eventually a cloud hid Jesus from their sight; then two angels stood beside the disciples and told them that Jesus would return in the same way they saw Him leave.  The disciples saw Jesus rise above a cloud.  This is how Jesus promised to return: “They will see the Son of Man coming on the clouds of the sky, with power and great glory (Matthew 24:30).”  Interestingly, the ascension of Jesus Christ as it is described in Acts 1:9-11 above may be described again in Revelation 11:12.

In Revelation 11: A Preterist Commentary–Who are the Two Witnesses? multi-faceted Biblical and historical evidence is presented suggesting that the post-resurrected Christ may have appeared in the flesh to prophesy for three and a half years from the start of the Jewish War until the start of the siege of Jerusalem.  The fact that the two witnesses are called “the two olive trees and the two lampstands that stand before the Lord” in Revelation 11:4 is strong evidence of the fact that the two witnesses may be one man, Jesus Christ.  The two olive trees of Zechariah 4:11-14 represent the king and high priest.  Like Melchizedek, the king of Salem, the Jewish Messiah was expected to be both king and high priest.  Jesus is given both titles in Hebrews 5.

The fact that Revelation 11:4 implies that the two witnesses are both king and high priest strongly points to one being, Jesus Christ.  Two witnesses is an appropriate title for Jesus Christ who may have partitioned His earthly ministry into two equal three and a half year periods.  The idea that the two witnesses may be one person also appears to explain the interesting switch to the singular tense regarding the death or deaths of this figure or figures in v. 9 in the original language.  For a detailed explanation of the amazing historical fulfillment of Revelation 11 during the Jewish War see Revelation 11: A Preterist Commentary–Who are the Two Witnesses?

Revelation 11:12 reads, “Then they [the two witnesses, Jesus Christ] heard a loud voice from heaven saying to them, ‘Come up here.’  And they went up to heaven in a cloud, while their enemies looked on [emphasis mine].”  This verse is an EXACT DESCRIPTION of the second coming according to Acts 1:9-11:

After he [Jesus] said this, he [Jesus] was taken up before their very eyes, and a cloud hid him from their sight.  They were looking intently up into the sky as he was going, when suddenly two men dressed in white stood beside them.  “Men of Galilee,” they said, “why do you stand here looking into the sky?  This same Jesus, who has been taken from you into heaven, will come back in the same way you have seen him go into heaven [emphasis mine].”

The resurrection of the two witnesses is an exact mirror of the ascension of Christ in Acts 1:9-11.  This fact may also imply that the two witnesses are Jesus Christ and that his visible ascension at the arrival of the Roman army in A.D. 70 is the beginning of the parousia of A.D. 70.

In Psalms 68:7-14 and Joel 2:1-11, God rides at the head of His conquering army.  Following this precedence, Jesus Christ comes on the clouds of heaven at the head of the Romans in A.D. 70.  Whenever the Lord rode on the clouds in judgment in the Bible, this generally implied that the city or kingdom inspiring God’s anger would not actually see the Lord at that time.  Though God and all other heavenly beings are only visible to humans in visions, verses like 2 Samuel 22:12 and Psalm 18:9-11 imply that God is not seen when He comes on the clouds in judgment because dark rain clouds hide His likeness just as a similar cloud hid Jesus from view at His ascension: “He parted the heavens and came down; dark clouds were under his feet. . . .  He made darkness his covering, his canopy around him—the dark rain clouds of the sky. [emphasis mine].” (Psalm 18:9-11) Whenever God was said to come on the clouds in judgment in the Old Testament, this often meant that dark rain clouds were to hide the brightness of God’s presence in the same way that a cloud hid Jesus from sight during his ascension according to Acts 1:9-11.

In the vs. above it is clear that God is rendered invisible when He comes on the clouds as the dark storm clouds that He rides are said to obscure Him from view.  Interestingly, Josephus mentions a drought in Jerusalem which came to an end at the arrival of Titus and his army when they laid siege to Jerusalem in A.D. 70.4  This rainstorm marking the arrival of the Romans appears to be Biblically significant.  In Revelation 11:6 says, “They [the two witnesses] have power to shut up the heavens so that it will not rain during the time they are prophesying.”  Josephus records the fact that Jesus the son of Ananus did not stop predicting the destruction of Jerusalem until the exact moment of his death when the Roman began their attack on Jerusalem in A.D. 70:

This cry of his was the loudest at the festivals; and he continued this ditty for seven years and five months, without growing hoarse, or being tired therewith, until the very time that he saw his presage in earnest fulfilled in our siege, when it ceased; for as he was going round upon the wall, he cried out with his utmost force, “Woe, woe to the city again, and to the people, and to the holy house!” And just as he added at the last, “Woe, woe to myself also!” there came a stone out of one of the engines, and smote him, and killed him immediately; and as he was uttering the very same presages he gave up the ghost.5 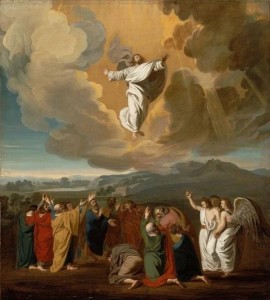 After Jesus ascended into heaven in the full view of his enemies, he was hidden by dark rain clouds triggered by the cessation of his prophesying according to Revelation 11:6.  Perhaps as Jesus rose above the rain clouds he, quite literally, came on the clouds in judgment as he often foretold?

Revelation 11:6 states that the drought would end once the two witnesses stop prophesying.  This presumably happened at Jesus’ death.  After Jesus, the two witnesses, rose up to heaven in full view of His enemies as implied in Revelation 11:12 and Acts 1:9-11, Jesus was presumably hidden by a dark rain cloud triggered by the cessation of His prophesying.  This rain mentioned by Josephus at the arrival of the Roman army and the death of Jesus the Son of Ananus in The Wars of the Jews 5.9.4 not only fulfills Revelation 11:6 but also matches Biblical precedent of precisely what it meant when God came on the clouds in judgment according to 2 Samuel 22:12 and Psalm 18:9-11.  The fact that it seems to have rained at or around the time of the ascension of Jesus, the two witnesses, and the arrival of foreign conquerors suggests that God came on the clouds in judgment in A.D. 70.  Recall, as stated above that Psalm 18:9-11 indicates that when God comes on the clouds in judgment the brightness of His coming is masked by dark rain clouds (Psalm 18:11).  It would seem that these dark rain clouds similarly masked the brightness of Jesus’ resurrection body as He ascended into heaven.  For an additional discussion concerning the two witnesses see the preterist commentary on Revelation 11.