Home > What is Preterism?

Preterism, Preterist Theology and the Preterist View of Eschatology: Definition

Preterism, Preterist Theology and the Preterist View of Eschatology answers “Christianity’s Achilles heel.” In Matthew 24, Matthew 16:28, Matthew 10:23, Mark 8:38-9:1, Mark 14:61-62, and John 21:22 Jesus promises to return within His generation, specifically within the lifetime of the Apostle John and the High Priest Caiaphas.  Preterism, preterist theology or the preterist view of eschatology is the Christian belief that Jesus has already returned and that most, if not all, end time prophecies have been fulfilled primarily or exclusively in the first century. 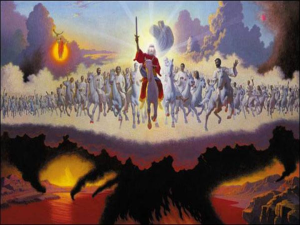 An artistic depiction of the second coming as it is described in Revelation 19.

Preterism, Preterist Interpretation, and the Preterist View of Eschatology: An Angelic Army in the Clouds was seen at the Start of the Jewish War in A.D. 66 EXACTLY as the Second Coming is Depicted in Revelation 19:11-15 and Many other Verses.

The second coming or Parousia is pictured in Revelation 19:11-15.  Here Jesus rides at the head of an angelic army of horsemen on the clouds of heaven.  Interestingly, a mass-vision of an angelic army on horseback was witnessed riding on the clouds at the very beginning of the Israel’s first-century war with Rome in A.D. 66.  This mass vision was recorded in several different historical accounts and religious documents.  One such historical account describes it as follows:

[O]n the twenty-first day of the month of Artemisius [Jyar], a certain prodigious and incredible phenomenon appeared; I suppose the account of it would seem to be a fable, were it not related by those that saw it, and were not the events that followed it of so considerable a nature as to deserve such signals; for, before sunsetting, chariots and troops of soldiers in their armor were seen running about among the clouds, and surrounding of cities.[i]

One thing did surprise me: On earth, whenever I thought of heaven, I anticipated that one day I’d see a gate made of pearls, because the Bible refers to the gates of pearl.[iv]  The gate wasn’t made of pearls, but was pearlescent—perhaps iridescent may be more descriptive.  To me, it looked as if someone had spread pearl icing on a cake.  The gate glowed and shimmered.  I paused and stared at the glorious hues and shimmering shades.  The luminescence dazzled me, and I would have been content to stay at that spot.  Yet I stepped forward as if being escorted into God’s presence.  I paused just outside the gate, and I could see inside.  It was like a city with paved streets.  To my amazement, they had been constructed of literal gold.  If you could imagine a street paved with gold bricks, that’s as close as I can come to describing what lay inside the gate.  Everything I saw was bright—the brightest colors my eyes had ever beheld—so powerful that no earthly human could take in this brilliance.[v] Preterism, Preterist Interpretation, and the Preterist View of Eschatology: The Messianic Kingdom is called the Kingdom of Heaven because it is centered in Heaven.

What about the Messianic Kingdom?  As stated above Hebrews 12:22 and Galatians 4:26 reveals that there is a Jerusalem that is in heaven.  It is there in the heavenly Jerusalem that Jesus, the Messiah, rules at the right hand of the Father.  See The Miraculous Fulfillment of Jeremiah 33:20-21 explains why Christ Rules from a Heavenly, Not Earthly, Throne.

Preterism, Preterist Interpretation, and the Preterist View of Eschatology: What About the Resurrection?

Preterism, Preterist Interpretation, and the Preterist View of Eschatology: Don’t believe the Critics.

This website will show how critics of preterism, preterist theology and the preterist view of eschatology reveal their ignorance of Biblical exegesis and Roman history by their arguments.  This website will highlight and explain the fulfillment of seemingly ALL end time Bible prophecies with historical events recorded by Roman historians often down to the tiniest details.

Interested in PRETERISM, PRETERIST THEOLOGY or THE PRETERIST VIEW OF ESCHATOLOGY, or are you a PRETERIST struggling with a prophecy or verse?  It DID happen just like the Bible says!  If you liked this essay, see PRETERIST BIBLE COMMENTARY for a detailed explanation of the FULFILLMENT OF ALL MAJOR END TIME PROPHECIES IN THE BIBLE. The more unbelievable the prophecy, the more amazing and miraculous the fulfillment!

[iii] In Revelation 21:2, the new Jerusalem is seen coming down from heaven.  What could this mean?  See Revelation 21: A Preterist Commentary and The Biblical Solution to the Predestination Paradox.

Preterism, Preterist Theology and the Preterist View of Eschatology Defined and Explained: Conclusion

Preterism, preterist theology, the preterist interpretation of the Bible and the preterist view of eschatology is the Christian belief that Jesus has already returned and that most, if not all, end time prophecies have been fulfilled.

Preterism, Preterist Theology, Preterist Interpretation of the Bible and the Preterist View of Eschatology Defined and Explained

0 thoughts on “What is Preterism, Preterist Theology and the Preterist View of Eschatology?”