The Return of the Jews to Israel

Among other things, the Book of Isaiah predicts the destruction of Jerusalem, the exile of its people, the return of the exiles and the subsequent glory of post-exilic Jerusalem.  These predictions proved accurate.  Jerusalem was destroyed by the Babylonians and many Israelites were exiled to Babylon in the sixth century B.C.  Verses 1-13 came to pass during the return of the Jews from Babylon roughly seventy years later.  Though these verses are fulfilled in the return of the Jews from Babylon and the glory of post-exilic Israel, these predictions may also point to the time of the end and beyond.  The fulfillment of these verses during the end of the age and thereafter will be the primary focus of this commentary. Many Israelites were exiled to Babylon in the sixth century B.C. Isaiah 60:1-13 was fulfilled during the return of the Jews from Babylon seventy years later.

The Return of the Jews to Israel

1 “Arise, shine, for your light has come, and the glory of the Lord rises upon you.  2 See, darkness covers the earth and thick darkness is over the peoples, but the Lord rises upon you and his glory appears over you.  3 Nations will come to your light, and kings to the brightness of your dawn.  4 “Lift up your eyes and look about you: All assemble and come to you; your sons come from afar, and your daughters are carried on the hip.  5 Then you will look and be radiant, your heart will throb and swell with joy; the wealth on the seas will be brought to you, to you the riches of the nations will come.  6 Herds of camels will cover your land, young camels of Midian and Ephah.  And all from Sheba will come, bearing gold and incense and proclaiming the praise of the Lord.  7 All Kedar’s flocks will be gathered to you, the rams of Nebaioth will serve you; they will be accepted as offerings on my altar, and I will adorn my glorious temple.  8 “Who are these that fly along like clouds, like doves to their nests?  9 Surely the islands look to me; in the lead are the ships of Tarshish, bringing your children from afar, with their silver and gold, to the honor of the Lord your God, the Holy One of Israel, for he has endowed you with splendor. 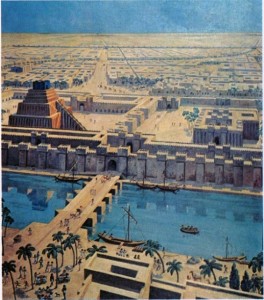 A Preterist Commentary on Isaiah 60:1-9:Vs. 1-13 were Fulfilled in the Sixth Century B.C. and again after the Jewish War in the First Century A.D.

As stated in the introduction, vs. 1-13 seem to have initially been fulfilled in the return of the Jews from exile in Babylon beginning in 538 B.C.  However, these verses might have multiple fulfillments.  I believe verses 1-13 are also fulfilled in the return of the Jewish Christians who had fled to Pella before the Jewish War, the migration of Gentile Christians to Israel and its capital after the Jewish War and the subsequent Bar Kokhba rebellion in the second century A.D., and the Christians of the Middle Ages and today that made and continue to make religious pilgrimages to Jerusalem as a sign of devotion to God as well as in the resurrection of the dead.1 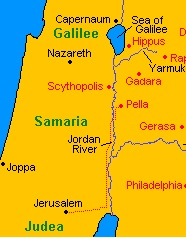 Christians fled to Pella during the Jewish War. These Christian Jews returned after the war.  The return of  Christian Jews to Israel also fulfills Isaiah 60:1-13.

A Preterist Commentary on Isaiah 60:4-9: The Return from Exile is a Symbol of the Resurrection.

Though vs. 1-13 literally describe the return of the Jews from exile, I believe the return of the exiles is itself an earthly symbol of the resurrection of the dead.  Verse 5 states, “Then you will look and be radiant. . . .”  This radiant joy over the return of the Jewish exiles to Israel seems to me to hint at the physical radiance of the resurrected bodies of the saints when they arrive in heaven.  See How the Resurrection Bodies of the Saints Perfectly Mirror Jesus’ Resurrection Body after His Ascension Into Heaven Fulfilling Philippians 3:20-21 and ALL Other Bible Verses on the Resurrection!!! and The Notion that the Resurrection is an Earthly Phenomenon whereby the Dead are raised as Perfected, Eternal Earthly Bodies is dispelled by 1 Corinthians 15:35-50 and Isaiah 65:20. 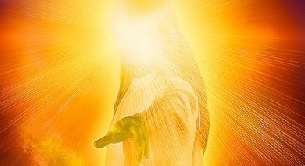 Verse 5 is not the only evidence in favor of the fact that the return of the exiles to Israel is an earthly metaphor of the resurrection.2  This message is highly implicit in Ezekiel 37.  In this chapter, Ezekiel sees a vision of a valley littered with bones.  Ezekiel is instructed to prophesy to these bones.  When he does, the bones merge together, flesh covers them, and they come to life as a vast multitude of people.  God tells Ezekiel that these bones are the house of Israel.  God then goes on to say, “I am going to open your graves and bring you up from them; I will bring you back to the land of Israel.”3  The chapter then continues with God promising to bring the Jews back to Israel.  Ezekiel 37 is another example in which the resurrection of the dead to heaven is symbolically tied to the return of the Jews from exile. 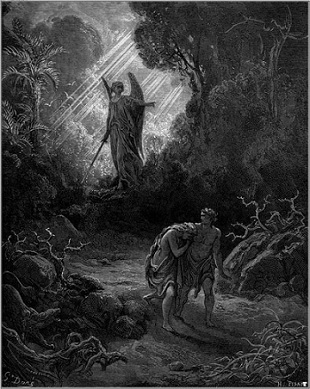 In Ezekiel 37, the return of the Jews to Israel is symbolized as a valley of dry bones rising from the dead.

10 “Foreigners will rebuild your walls, and their kings will serve you.  Though in anger I struck you, in favor I will show you compassion.  11 Your gates will always stand open, they will never be shut, day or night, so that people may bring you the wealth of the nations—their kings led in triumphal procession.  12 For the nation or kingdom that will not serve you will perish; it will be utterly ruined.  13 “The glory of Lebanon will come to you, the juniper, the fir and the cypress together, to adorn my sanctuary; and I will glorify the place for my feet.  14 The children of your oppressors will come bowing before you; all who despise you will bow down at your feet and will call you the City of the Lord, Zion of the Holy One of Israel.  15 “Although you have been forsaken and hated, with no one traveling through, I will make you the everlasting pride and the joy of all generations.  16 You will drink the milk of nations and be nursed at royal breasts.  Then you will know that I, the Lord, am your Savior, your Redeemer, the Mighty One of Jacob.  17 Instead of bronze I will bring you gold, and silver in place of iron.  Instead of wood I will bring you bronze, and iron in place of stones.  I will make peace your governor and well-being your ruler.  18 No longer will violence be heard in your land, nor ruin or destruction within your borders, but you will call your walls Salvation and your gates Praise.  19 The sun will no more be your light by day, nor will the brightness of the moon shine on you, for the Lord will be your everlasting light, and your God will be your glory.  20 Your sun will never set again, and your moon will wane no more; the Lord will be your everlasting light, and your days of sorrow will end. 21 Then all your people will be righteous and they will possess the land forever.  They are the shoot I have planted, the work of my hands, for the display of my splendor.  22 The least of you will become a thousand, the smallest a mighty nation.  I am the Lord; in its time I will do this swiftly.”

Medieval Christian pilgrims on their way to Jerusalem

A Preterist Commentary on Isaiah 60:10-18: In the Thousand Years between the Jewish War and the Crusades, Christian-Occupied Israel was Peaceful and Wealthy.  This Wealth was largely because of Donations from European Nobility.

After the Jewish War and the Bar Kokhba Rebellion, Israel became a desolate wasteland in fulfillment of v. 15.  However, after these wars, Israel experienced great peace and prosperity for a thousand years until the Crusades as foretold in vs. 17-18.  Jerusalem then called by a new name, Aelia Capitoline, grew to become an exclusively Christian city by the end of the fourth century.4   Indeed upon also converting to Christianity, the Roman Empire once the enemy responsible for the devastation of Israel during the Jewish War and the Bar Kokhba Rebellion eventually began to honor the Holy Land as Christian pilgrims streamed to Jerusalem and Israel in veneration of the city and devotion to God.  Thus the hope of v. 14 had been fulfilled:

The children of your oppressors will come bowing before you; all who despise you will bow down at your feet and will call you the City of the Lord, Zion of the Holy One of Israel.   ‘Although you have been forsaken and hated, with no one traveling through, I will make you the everlasting pride and the joy of all generations.’

Christian Jerusalem was very rich.  This wealth was largely the result of generous donations by wealthy pilgrims who provided these churches and monasteries with a great deal of income.  Notable donors included the Emperor Constantine as well as Byzantine emperors in fulfillment of vs. 3-5, 10, 16 and especially 11: “Your gates will always stand open, they will never be shut, day or night, so that people may bring you the wealth of the nations—their kings led in triumphal procession.” The Emperor Constantine donated abundantly to Israel in fulfillment of Isaiah 60:10-11:“Foreigners will rebuild your walls, and their kings will serve you.  Though in anger I struck you, in favor I will show you compassion.Your gates will always stand open, they will never be shut, day or night, so that people may bring you the wealth of the nations—their kings led in triumphal procession.”

A Preterist Commentary on Isaiah 60:17-18: The Peaceful Bliss of Post-War Jerusalem Mirrors Post-Resurrection Joy in Heaven.

Though the predictions in this chapter clearly have an earthly fulfillment, I believe these verses, especially vs. 19 and 20, are ultimately fulfilled in heaven after the resurrection.5  Galatians 4:26 calls heaven “the Jerusalem that is above.”  This title suggests that the Jerusalem on earth together with its temple is “a copy and shadow of what is in heaven.” (Hebrews 8:5)  In verses 18-21, post-exilic and post-war Jerusalem appears to be described in the image of heaven.  The use of symbolic hyperbole in these verses to describe the peace and joy in post-war and post-exilic Jerusalem supports the notion that Jerusalem on earth is a symbolic type and dark shadow of the Jerusalem that is in heaven.  Thus these verses are fulfilled in a symbolic sense in post-exilic and post-war Jerusalem and seemingly more literally in heaven after the resurrection of the dead.   In light of this idea, one can appreciate how hyperbole and metaphor are used to describe the peaceful bliss of post-exilic and post-war Jerusalem as it serves to mirror the post-resurrection euphoria and glory of heaven.

As indicated in the above Preterist commentary on Isaiah 60, this chapter was fulfilled in the return of the Jews from exile in the sixth century B.C. and then again at the time of the end and beyond.