Crying out to Deaf Ears

In the following Preterist commentary on Luke 19:12-27, 41-44, the meaning of the parable of the minas is explained and the fulfillment of the prophetic warning in vs. 41-44 is addressed.

Mina of Athens. 1904. The mina was a unit of weight and currency.

Crying out to Deaf Ears

A man of noble birth went to a distant country to have himself appointed king and then to return. 13So he called ten of his servants and gave them ten minas.’Put this money to work,’ he said, ‘until I come back.’ 14“But his subjects hated him and sent a delegation after him to say, ‘We don’t want this man to be our king.’ 15“He was made king, however, and returned home. Then he sent for the servants to whom he had given the money, in order to find out what they had gained with it. 16“The first one came and said, ‘Sir, your mina has earned ten more.’ 17” ‘Well done, my good servant!’ his master replied. ‘Because you have been trustworthy in a very small matter, take charge of ten cities.’ 18“The second came and said, ‘Sir, your mina has earned five more.’ 19“His master answered, ‘You take charge of five cities.’ 20“Then another servant came and said, ‘Sir, here is your mina; I have kept it laid away in a piece of cloth. 21I was afraid of you, because you are a hard man. You take out what you did not put in and reap what you did not sow.’ 22“His master replied, ‘I will judge you by your own words, you wicked servant! You knew, did you, that I am a hard man, taking out what I did not put in, and reaping what I did not sow? 23Why then didn’t you put my money on deposit, so that when I came back, I could have collected it with interest?’ 24“Then he said to those standing by, ‘Take his mina away from him and give it to the one who has ten minas.’ 25” ‘Sir,’ they said, ‘he already has ten!’ 26“He replied, ‘I tell you that to everyone who has, more will be given, but as for the one who has nothing, even what he has will be taken away. 27But those enemies of mine who did not want me to be king over them—bring them here and kill them in front of me.” 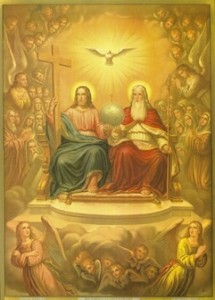 In fulfillment of Luke 19:12, Jesus was seated at the right hand of the Father after His ascension where He rules the earth from a heavenly throne. Christ’s reign over the earth from heaven is the Messianic kingdom called the kingdom of heaven throughout the Gospels.

The man of noble birth who went to a distant country to be crowned king and then return is Jesus.  The distant country is heaven.  After Jesus’ ascension into heaven, He was seated at the right hand of the Father where He rules the earth from a heavenly throne.  The reign of Christ in heaven is the Messianic kingdom.  See Jeremiah 33:20-21 explains why Christ Rules From a Heavenly, Not Earthly, Throne.  The return of the king in v. 12 is the second coming.  The servants that are given the minas are the disciples, teachers and prophets.  This parable teaches that those who faithfully serve God will be richly rewarded in the kingdom of heaven while those who fail to do so will lose their inheritance.

The return of the king in Luke 19:12 is the second coming depicted above as it is described in Revelation 19.

The subjects of the kingdom that hated the Messiah and did not want him to be king are the teachers of the Law and Pharisees.  These men were publicly denounced throughout Jesus’ ministry as illustrated in Matthew 23. Fearing that they would lose their positions of authority and perhaps even their lives as is suggested in v. 27 and Matthew 21:38, these men plotted to have Jesus killed in order to prevent Him from becoming the king of Israel as the Messiah was expected to be.

In v. 27 Jesus declares that these men would be killed before Him.  This threat was enacted following Jesus’ return during the Jewish War described in vs. 41-44. During the Jewish War and the death of the lawless one, Jesus made several miraculous appearances.  These various appearances of Christ during and shortly after the Jewish War exemplify seemingly all the ways in which God appeared in the Old and New Testaments. They also seem to literally fulfill every detail of every prophecy concerning the parousia or second coming.  See Historical Evidence that Jesus was LITERALLY SEEN in the Clouds in the First Century.

41 As he approached Jerusalem and saw the city, he wept over it 42 and said, “If you, even you, had only known on this day what would bring you peace—but now it is hidden from your eyes. 43 The days will come upon you when your enemies will build an embankment against you and encircle you and hem you in on every side. 44 They will dash you to the ground, you and the children within your walls. They will not leave one stone on another, because you did not recognize the time of God’s coming to you.”

After the siege of Jerusalem in A.D. 70, the Romans demolished the city and its Temple fulfilling Luke 19:43-44 “[Y]our enemies will build an embankment against you and encircle you and hem you in on every side. . . . They will not leave one stone on another.”

A Preterist Interpretation, Exposition and Commentary of Luke 19:41-44: The Romans encircled Jerusalem and built an Embankment against the City in A.D. 70.  Children were dashed to the Ground according to the Historian Josephus.  And the Temple was destroyed with no Stone left on Another.

In A.D. 70 the Romans built a wall around Jerusalem in order to prevent people from escaping.  Meanwhile the Romans also built embankments to break through the fortified walls of Jerusalem while the army encircled the city and laid siege to it inducing a terrible famine within the city walls literally fulfilling v. 43: “The days will come upon you when your enemies will build an embankment against you and encircle you and hem you in on every side.”  The Jewish rebels responsible for the war with Rome terrorized the people trapped within the city stealing food and supplies from them to fuel the resistance.  In fulfillment of v. 44, these rebels had “no compassion for hoary hairs or infancy: children were actually lifted up with the fragments [of food] to which they clung and dashed to the ground.”1  Five months later, Jerusalem was burned and demolished and 1,100,000 people were killed.2  Caesar then ordered his army to “demolish the entire city and temple.”3  The Romans left only the western wall and the highest towers intact, “but for all the rest of the wall, it was so thoroughly laid even with the ground by those that dug it up to the foundation, that there was left nothing to make those that came thither believe it had ever been inhabited.”4  Thus Jesus’ dire warning in vs. 44 came to pass: Jerusalem’s enemies did “not leave one stone on another.” The destruction of the Temple in A.D. 70. The temple in Jerusalem was entirely demolished in A.D. 70 such that the Romans did “not leave one stone on another.” (Luke 19:44)

In the following Preterist commentary on Luke 19:12-27, 41-44, the meaning of the parable of the minas is explained and the fulfillment of the prophetic warning in vs. 41-44 is addressed.