The First Century Faith that Made a Mountain Move

In Matthew 17:20, Jesus declares, “[I]f you have faith . . . you can say to this mountain, ‘Move from here to there and it will move.’”  This mountain may actually be a city since cities are often called mountains in the Bible (Psalms 2:6; 48:1; Isaiah 66:20; Jeremiah 51:25; Joel 3:17).  If this interpretation is correct, then Jesus’ words are prophetic.  See the following Preterist commentary on Matthew 17:20 for the fulfillment of this prophecy during Israel’s first century war with Rome. Jesus’ promise that faith can move mountains in Matthew 17:20 is actually an end time prophecy.

The First Century Faith that Made a Mountain Move

20He replied, “Because you have so little faith. I tell you the truth, if you have faith as small as a mustard seed, you can say to this mountain, ‘Move from here to there’ and it will move. Nothing will be impossible for you.”

A Preterist Commentary on Matthew 17:20: Mountain means Kingdom or City in the Bible.  This Mountain or City is Likely Taricheae.

As is implied in Daniel 9:16 and many other verses in the Bible, mountain is term often used to denote a city or kingdom (Psalms 2:6; 48:1; Isaiah 66:20; Jeremiah 51:25; Joel 3:17).  Because of the similarities between this verse and Matthew 21:21 and since Jesus and His disciples were in Galilee according to v. 22 when Jesus spoke these words, it is likely that the mountain referred to in this verse is a city by the Sea of Galilee.  In Matthew 21:21, Jesus declares, “[I]f you have faith and do not doubt . . . you can say to this mountain, ‘Go, throw yourself into the sea,’ and it will be done.”   In light of Matthew 21:21 and the fact that Jesus and His disciples were in Galilee at the time, the “there” that Jesus likely pointed to indicating where the mountain would end up was probably the Sea of Galilee.  And since mountains often denote cities in the Bible it appears that Jesus suggested that the disciples would be able to move one of Galilee’s coastal cities into the adjoining sea.  Though the identity of the mountain or city in v. 20 is uncertain, Jesus seems to have been referring to the city of Taricheae.

In the Bible, mountain is term often used to denote a city or kingdom. Unable to withstand the Romans within the confines of their cities, the people of the mountain of Taricheae fled to the Sea of Galilee where they were slain by the combined effects of a severe storm and Roman naval warfare. Thus the mountain Taricheae had been cast into the sea.

A Preterist Commentary on Matthew 17:20: The Mountain of Taricheae was cast into the Sea during the Jewish War.

Perceiving that they could not withstand the Romans within the confines of these cities, many Jews during the Jewish War fled Taricheae by ship to the Sea of Galilee.  There at sea, these Jewish rebels were ultimately slain by the Romans who pursued them on ships.1  Thus in a sense, the mountain of Taricheae had, in fact, been thrown into the sea.

A Preterist Commentary on Matthew 17:20: The Sea Represents Gentile Rome in Revelation.  Thus the Casting of the City into the Sea also prophetically symbolizes the Exile of the Israelites after the War.

There may be more to this enigmatic verse.  Sea is often used in the Bible to represent Gentile nations (see In the Bible “Earth” Signifies the Specific Land Addressed While “Sea” Symbolizes Foreign Nations). During the Jewish War, the fact that many people of Taricheae died at sea was an ominous sign hinting to the fate of the rest of Israel.  After the war ended, many Israelites were exiled throughout the Roman Empire.2  Some of these exiles came from Taricheae.  Here one can see another way in which Matthew 21:21 and Matthew 17:20 are fulfilled.  The casting of the mountains or cities of Israel into the sea may represent the exile of the Jews throughout Gentile Rome.

To cast something into the sea or Abyss is a Biblical expression signifying death. The Abyss is the realm of the damned also known as outer darkness.

A Preterist Commentary on Matthew 17:20: The Sea also represents the Abyss, the Realm of the Dead.  Therefore, the Casting of the City to the Sea also symbolizes the Death of its People.

Sea has another, deeper meaning in the Bible.  It also represents the Abyss, the realm of the dead (see The Poetic Biblical Link Between “Sea” and “Abyss”). The hurling of a mountain or city into the sea or Abyss is therefore also a symbolic expression concerning the destruction of a city and the slaughter of its inhabitants.  Hence this expression once again points to the massacre at Taicheae during the Jewish War.  Its people having died at the Sea of Galilee, the mountain of Taricheae had both literally and figuratively been cast into the sea.

According to Revelation 6:9-11, the plagues of Revelation and their fulfillment during the Jewish War were ultimately a consequence of the prayers of the saints.  After Jesus’ crucifixion, many Christians in Israel were intensely persecuted by their Jewish brethren.  God answered their pleas for justice in A.D. 66, at the start of Israel’s war with Rome.  During this war, Israel was destroyed by the Roman army and many Israelites were killed and exiled.  Jesus was right.  As a result of the faith of the saints, the mountains of Israel had been thrown into the sea. 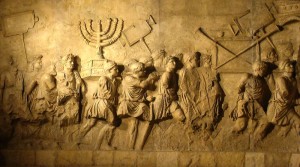 After the Jewish War, many Israelites were exiled throughout Rome fulfilling Matthew 17:20.

As stated in the above Preterist commentary on Matthew 17:20, Matthew 17:20 was fulfilled during the Jewish War in the first century.