The Fulfillment of the Parable of the Wedding Banquet

In Matthew 22:1-14: A Preterist Commentary, the underlying prophecy of the parable of the wedding banquet is explained together with its amazing first century fulfillment. At a wedding feast in Galilee, Jesus turned water into wine.

The Fulfillment of the Parable of the Wedding Banquet

1Jesus spoke to them again in parables, saying: 2“The kingdom of heaven is like a king who prepared a wedding banquet for his son. 3He sent his servants to those who had been invited to the banquet to tell them to come, but they refused to come.

A Preterist Commentary on Matthew 22:1-3: The Religious Authorities refuse to come to the Wedding.

The king is God, the prince is the Messiah, and the bride is the church.  This wedding is depicted in Revelation 21:2.  Those invited to royal weddings are usually the wealthy ruling class.  In this parable, God sends His servants, the prophets, to invite the religious authorities to the wedding banquet of His son in the kingdom of heaven.  Ultimately these men refused.  Not only did the ruling class refuse this invitation, they even prevented others from coming.  Addressing the religious elite Jesus roared, “Woe to you teachers of the law and Pharisees, you hypocrites!  You shut the kingdom of heaven in men’s faces.  You yourselves do not enter, nor will you let those enter who are trying to (Matthew 23:13).”

4“Then he sent some more servants and said, ‘Tell those who have been invited that I have prepared my dinner: My oxen and fattened cattle have been butchered, and everything is ready. Come to the wedding banquet.’

A Preterist Commentary on Matthew 22:4: The Wedding Dinner is the Body of Christ.

In John 6:53 Jesus says, “I tell you the truth, unless you eat the flesh of the Son of Man and drink his blood, you have no life in you.”  The livestock that had been slaughtered for the feast presumably represents the Messiah Himself—the Lamb of God.

5“But they paid no attention and went off—one to his field, another to his business. 6The rest seized his servants, mistreated them and killed them.  7The king was enraged. He sent his army and destroyed those murderers and burned their city. 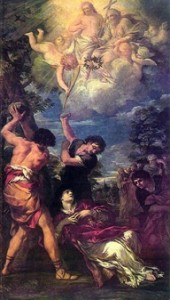 After the martyrdom of Stephen shown above, a mass persecution of Christians broke out in Judea in the first century in fulfillment of Matthew 22:6: “The rest seized his servants [the saints], mistreated them and killed them.”

A Preterist Commentary on Matthew 22:5-7: The Roman Army destroys Israel for killing the Saints.

Enraged at the teachers of the Law, Jesus bellowed:

I am sending you prophets and wise men and teachers.  Some of them you will kill and crucify; others you will flog in your synagogues and pursue from town to town.  And so upon you will come all the righteous blood that has been shed on the earth, from the blood of righteous Abel to the blood of Zechariah son of Berekiah, whom you murdered between the temple and the altar.  I tell you the truth, all this will come upon this generation (Matthew 23:34-36). 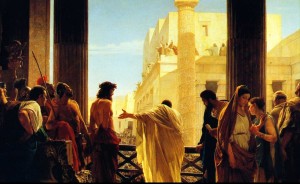 After successfully having Jesus killed, the Jewish authorities immediately turned their hand against the Christian church.  This mass persecution is recorded in Acts 8:1.  Concerning this persecution the church historian Eusebius writes the following:

First they [the Jews] stoned Stephen to death; then James the son of Zebedee and the brother of John was beheaded; and finally James, the first after our Saviour’s Ascension to be raised to the bishop’s throne there, lost his life in the way described, while the remaining apostles, in constant danger from murderous plots, were driven out of Judaea.1

Arguably the worst war in Israel’s history, the Jewish War (A.D. 66-74) fulfills Matthew 22:7: “The king [Christ] was enraged. He sent his army [the Romans] and destroyed those murderers and burned their city [Jerusalem].”

As a consequence of these crimes, that wicked generation suffered through the worst war in Israel’s history.  Like the king who sent His army to destroy the people invited to the banquet, God sent Rome in A.D. 66, the most powerful army in the world, to destroy those murderers.

8“Then he said to his servants, ‘The wedding banquet is ready, but those I invited did not deserve to come. 9Go to the street corners and invite to the banquet anyone you find.’ 10So the servants went out into the streets and gathered all the people they could find, both good and bad, and the wedding hall was filled with guests.

A Preterist Commentary on Matthew 22:8-10: The Common Man replaces the Religious Elite.

After being rejected by the leaders of the community, the king then invites the commoners.  Verses 9 and 10 perfectly reflect the skewed demographics of the early Christian community.  Those Jews who embraced the kingdom of heaven were typically the lowly and poor: “Brothers and sisters, think of what you were when you were called. Not many of you were wise by human standards; not many were influential; not many were of noble birth.  But God chose the foolish things of the world to shame the wise; God chose the weak things of the world to shame the strong (1 Corinthians 1:26-27).”

11“But when the king came in to see the guests, he noticed a man there who was not wearing wedding clothes. 12‘Friend,’ he asked, ‘how did you get in here without wedding clothes?’ The man was speechless. 13“Then the king told the attendants, ‘Tie him hand and foot, and throw him outside, into the darkness, where there will be weeping and gnashing of teeth.’ 14“For many are invited, but few are chosen.”

Revelation 19:8 reads, “‘Fine linen, bright and clean, was given her [the church] to wear.’  (Fine linen stands for the righteous acts of the saints.)”  The whiteness of these robes represents moral purity.  The man not wearing wedding clothes signifies those still in sin.  This individual was cast out of the new Jerusalem into the darkness of the night signifying the outer darkness mentioned often by Jesus in the gospels. 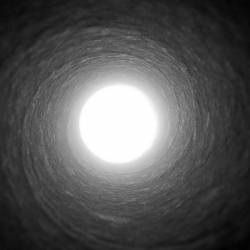 Light at the end of the tunnel

A Preterist Commentary on Matthew 22:13: According to Near-Death Experiences, Hell is a Dark Wasteland like the Outer Darkness of v. 13.

It is frequently noted in near-death experiences (NDE’s) that the afterlife is divided into pleasant and unpleasant dimensions.  According to NDE’s heaven is described as a bright, luminescent habitation whereas hell is a realm of darkness.  Many who have had hell-like afterlife experiences describe a dark, barren wasteland of wandering spirits.  Could this be the outer darkness spoken of in this parable?

Interested in THE PRETERIST VIEW OF ESCHATOLOGY, or are you a PRETERISTstruggling with a prophecy or verse?  It DID happen just like the Bible says!  If you liked this essay, see PRETERIST BIBLE COMMENTARY for a detailed explanation of the FULFILLMENT OF ALL MAJOR END TIME PROPHECIES IN THE BIBLE. The more unbelievable the prophecy, the more amazing and miraculous the fulfillment!

In Matthew 22:1-14: A Preterist Commentary, the underlying prophecy of the parable of the wedding banquet is explained together with its amazing first century fulfillment.