The End Time Prophecy in the Casting out of Legion

In Matthew 8:11-12, Jesus predicts that many people from the surrounding nations will take their places in the kingdom of heaven while the people of the kingdom will be thrown outside into the darkness.  The outer darkness mentioned by Jesus is the afterlife realm called Sheol or the Abyss.  Also called the void by near-death experience researchers, Sheol is a gaping expanse of darkness.  The fate of unfaithful Israel is also reflected on earth by the exile of ethnic Jews after the Jewish War and subsequent Bar Kokhba Rebellion.  After these wars, Israel’s Gentile Christian population grew such that by A.D. 614 Israel was 95% Christian.1  This earthly and heavenly message is then enacted by Jesus in the following prophetic miracle in which Jesus casts out a legion of demons into a herd of pigs that runs over a ledge and drowns in the abyss. The miracle of the casting out of Legion from the demoniac is a physical manifestation of Jesus’ prediction in Matthew 8:11-12.

The End Time Prophecy in the Casting out of Legion

11I say to you that many will come from the east and the west, and will take their places at the feast with Abraham, Isaac and Jacob in the kingdom of heaven.  12But the subjects of the kingdom will be thrown outside, into the darkness, where there will be weeping and gnashing of teeth.”

A Preterist Commentary on Matthew 8:11-12: Nearly all Ethnic Jews were exiled from Israel after the Jewish War and subsequent Bar Kokhba Rebellion.  They were gradually replaced by Gentile Christians.

In Deuteronomy 28:63-64 God threatens to uproot the people of Israel if they ever turn away from their God.  This is precisely what happened after the Jewish War.  According to Wars of the Jews, ninety-seven thousand Jews were exiled from Israel.2  Then after the Bar Kokhba Rebellion of the second century A.D., nearly all ethnic Jews were expelled from Israel.3  Interestingly, in the 1000 years after the Jewish War there was a dramatic shift in demographics in Judea.  Once populated almost exclusively by ethnic Jews, Judea was 95% Christian by A.D. 614.4 A Preterist Commentary on Matthew 8:11-12: Christianity Spread rapidly among the Gentiles causing a Demographic Shift in Heaven.

Galatians 4:26 reads, “But the Jerusalem above is free; she is our mother.” Hebrews 12:22 presents a similar message: “But you have come to Mount Zion and to the city of the living God, the heavenly Jerusalem, and to myriads of angels.” As implied in Galatians 4:26 and Hebrews 12:22, Israel, the Promised Land, and its spiritual capital represent heaven.

In vs. 11-12 Jesus indicates that many Gentiles will be welcomed into the kingdom of heaven while many Israelites will be cast to hell as they had been cast out of Israel.  The fact that Gentiles are now admitted into heaven alongside the Jewish saints is reflected in the demographic shift in Israel in which Gentile Christians repopulated the land of Israel during the thousand years between the first and second Jewish revolts and the Crusades. 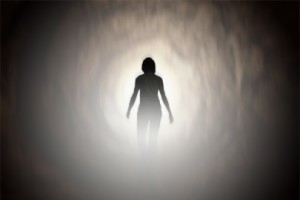 In some near-death experiences people describe a void of darkness. Jesus calls this realm “outer darkness” in Matthew 8:12.

A Preterist Commentary on Matthew 8:11-12: The Outer Darkness in v. 12 is testified to in Near-Death Experiences and Mirrored in the Egyptian Mines many Jews were forced to work in after the Jewish War.

Similarly, as an earthly reflection of their slavery to sin in hell, many Jewish rebels were sent to work as slaves in the Egyptian mines after the war with Rome.5  Many people who have had near-death experiences report experiencing a fearful, barren, and dark world like the realm of outer darkness referred to in Matthew 8:12.6  The darkness of these mines ominously points to and mirrors the fate awaiting some of these Israelite slaves after death.

The miracle in which Jesus casts out a legion of demons into a herd of pigs in Matthew 8:28-32 is a symbolic illustration of the same message presented in Matthew 8:11-12 above.

28When they arrived at the other side in the region of the Gadarenes, two demon-possessed men coming from the tombs met him.  They were so violent that no one could pass that way.  29“What do you want with us, Son of God?” they shouted.  “Have you come here to torture us before the appointed time?”  30Some distance from them a large herd of pigs was feeding.  31The demons begged Jesus, “If you drive us out, send us into the herd of pigs.”  32He said to them, “Go!” So they came out and went into the pigs, and the whole herd rushed down the steep bank into the lake and died in the water. 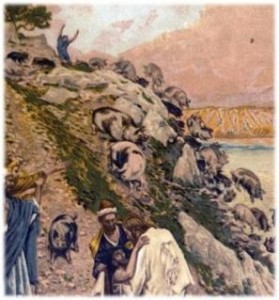 A Preterist Commentary on Matthew 8:28-32: Jesus’ Message in Matthew 8:11-12 is illustrated in the Miracle Above.

Underlying the exorcism of the two men at the region of the Gadarenes is a prophecy.  According to Mosaic Law, pigs are unclean animals.  As is implied in Acts 11:5-18, unclean animals represent Gentiles.   In John 8:39-44 Jesus calls those Jews plotting His murder children of Satan, an epithet denying their connection to God and Abraham.  Though genetically Jewish, Jesus’ enemies are not considered true descendants of Abraham and as such are spiritually Gentile.  Both the demons and the herd of pigs in this miracle represent these Jewish “Gentiles.”

As stated many times throughout this commentary, throughout the Book of Revelation and much of the Bible, sea represents the Gentile nations. See In the Bible “Earth” Signifies the Specific Land Addressed While “Sea” Symbolizes Foreign Nations.  It also represents hell, the Abyss.  See The Poetic Biblical Link Between “Sea” and “Abyss”.  As stated above, many Jews of the first century were expelled from Israel after the Jewish War and the Bar Kokhba Rebellion and sent throughout Gentile Rome where many were enslaved and killed in public spectacle.  The fact that the herd of pigs fall into the sea foreshadows both the exile of the wicked throughout Rome, the sea, and the hurling of their souls into hell, the Abyss.  The fate of these people in the afterlife is seemingly reflected on earth by their exile from Israel, representing heaven as implied in Hebrews 4, Hebrews 12:22, and Galatians 4:26.

As stated in the above Preterist commentary on Matthew 8:11-12, 28-32, Jesus accurately predicts in both word and deed that Gentiles will replace unfaithful Jews in the kingdom of God.