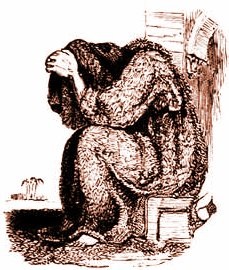 Evidence that the wedding of Revelation 21:2 is fulfilled in the fall of Jerusalem and the destruction of the Temple in A.D. 70 echoes the precedent set in 2 Esdras in which the entry of a woman’s son into his marriage chamber is explicitly said to symbolize the fall of Jerusalem (2 Esdras 10:48).  In 2 Esdras 9:38-10:59 the prophet sees a vision of a woman mourning after her son died on his wedding night.  The prophet rebukes the woman for mourning over just one person after the whole city of Jerusalem had been destroyed.  Then the woman’s appearance becomes bright and she disappears and the prophet sees a city with large foundations.  An angel explains the vision to the prophet and he is told that the entry of the son who appears to represent the Shekinah (2 Esdras 10:45-48) into the marriage chamber symbolizes the fall of Jerusalem: “But whereas she said unto thee, That my son coming into his marriage chamber happened to have a fail, and died: this was the destruction that came to Jerusalem (2 Esdras 10:48).”