A Preterist Commentary on 2 Peter 3:5-13: Summary and Highlights

Though the prophecies concerning the destruction of heaven and earth are apocalyptic in style and thus not strictly literal, there is a literal core of truth to these prophecies. Throughout the Bible, “earth” represents Israel.  See In the Bible “Earth” Signifies the Specific Land Addressed While “Sea” Symbolizes Foreign Nations. The destruction of Israel, the earth, began shortly thereafter when the Roman army arrived, crushed the Jewish revolt, burned the province and left Israel a charred wasteland.  Therefore, the destruction of the earth representing Israel by fire predicted in 2 Peter 3 was fulfilled in Rome’s scorched earth policy during the Jewish War.  Furthermore, at the final supernatural and miraculous appearance of Christ at the death of the beast, a famous catastrophe hurled fire into the sky and upon the earth; darkened the sun, moon and stars; and killed untold numbers.  In Roman History 60.23.5, Cassius Dio says that those that witnessed the event believed that all of heaven and earth had been destroyed:“[T]hose close at hand, believed that the whole world was being turned upside down, that the sun was disappearing into the earth and that the earth was being lifted to the sky.”  What famous event at the death of the beast also fulfilled these prophecies in a shockingly literal way?  The historical fulfillment of these verses is discussed below.

The Destruction of Heaven and Earth in the First Century

According to Genesis 1, the earth was a water world before its creation.

5But they deliberately forgot that long ago by God’s word the heavens existed and the earth was formed out of water and by water.  6By these waters also the world of that time was deluged and destroyed.  7By the same word the present heavens and earth are reserved for fire, being kept for the day of judgment and destruction of the ungodly.

As part of the Roman scorched-earth policy, Josephus records the fact that the Romans literally destroyed the cities and much of the countryside of Israel, the earth, by fire during the Jewish War.  See The Destruction of Heaven and Earth and the New Heaven and Earth Explained! for a detailed discussion.  Having addressed the literal destruction of the earth by fire, let us now address what was actually destroyed at this time in addition to its covenantal significance and meaning. (See Why a Fully Consistent Approach to Biblical Exegesis Implies the Creation of Genesis 1 Is Not About the Physical Creation of the Cosmos and Why Noah’s Flood Also Appears to Have Been an Historical Parable about a War.)

8 But do not forget this one thing, dear friends: With the Lord a day is like a thousand years, and a thousand years are like a day. 9 The Lord is not slow in keeping his promise, as some understand slowness. Instead he is patient with you, not wanting anyone to perish, but everyone to come to repentance.

Though Jesus promised to return “soon” throughout the New Testament, Christians still awaiting the second coming often cite v. 8 as a way to justify the unexpected delay of Christ’s coming. Because “a day is like a thousand years, and a thousand years are like a day” to the Lord, perhaps Jesus’ use of “soon” and “at hand” to describe His future return at the end of the age should be understood in light of God’s timing?  There a significant problem with this logic.  James Stuart Russell writes the following in his famous book, The Parousia:

It is sometimes said that the whole period between the incarnation and the end of the world is regarded in the New Testament as ‘the end of the age.’  But this bears a manifest incongruity in its very front.  How could the end of a period be a long protracted duration? Especially how could it be longer than the period of which it is the end?  More time has already elapsed since the incarnation than from the giving of the law to the first coming of Christ: so that, on this hypothesis, the end of the age is a great deal longer than the age itself.1

10 But the day of the Lord will come like a thief. The heavens will disappear with a roar; the elements will be destroyed by fire, and the earth and everything done in it will be laid bare.  11 Since everything will be destroyed in this way, what kind of people ought you to be? You ought to live holy and godly lives 12 as you look forward to the day of God and speed its coming. That day will bring about the destruction of the heavens by fire, and the elements will melt in the heat. 13 But in keeping with his promise we are looking forward to a new heaven and a new earth, where righteousness dwells.

The conflagration of heaven may be fulfilled, in part by, the orange light from fires which can light up the smoke and night air above the flames making it appear as though the sky itself is also on fire.  This interesting optical effect can give the illusion that the sky is also being consumed by fire.

Furthermore, the smoke from a great fire like the burning of Jerusalem in A.D. 70 might darken or obscure the sun, moon and stars as seems to be implied in Isaiah 51:6: “Lift up your eyes to the heavens, look at the earth beneath; the heavens will vanish like smoke[.]”  Perhaps the smoke from the burning of Jerusalem in A.D. 70 darkened the sun, moon and stars literally fulfilling 2 Peter 3:10: “The heavens will disappear with a roar[.]”?   The darkening of the heavenly lights is a sign of the destruction of heaven (Isaiah 13:9-13; 34:4-5; Jeremiah 4:23-26; Ezekiel 32:7-9).  See The Destruction of Heaven and Earth and the New Heaven and Earth Explained. Preterist Eschatology–Why the Destruction of Heaven and Earth is Not What it May Seem: If God was going to Destroy the Entire Universe, Why did Jesus tell the Saints to Flee to the Mountains in Luke 21:21-22?

Evidence against the idea that 2 Peter 3 predicts the complete destruction of the universe by fire is found in Luke 21:21-22: “Then let those who are in Judea flee to the mountains, let those in the city get out, and let those in the country not enter the city.  For this is the time of punishment in fulfillment of all that has been written.”  If God intended to destroy the entire world by fire, what good would it do to flee to the mountains? Here one can also see the difficultly posed in the belief that 2 Peter 3:12 predicts the complete dissolution of the universe by fire at the time of the end.

A Covenant Eschatology Exposition and Commentary of 2 Peter 3:7-13: The Greek Word for “Elements” in 2 Peter 3:7-13 refers to the Elements or Customs of the Law of Moses in Every Other Instance in which it is used in the New Testament.

If 2 Peter 3:12 is not about the destruction of the earth and sky and the melting of the physical elements, then what is this verse about?  The Greek word translated elements in these verses is stoichion.  Every other time stoichion is used in the New Testament, it refers to the elements or regulations of the Law of Moses.2  Thus these verses may hint at the fulfillment of the Law of Moses predicted in Hebrews 8:13: “By calling this covenant “new,” he has made the first one [the Law of Moses] obsolete; and what is obsolete and outdated will soon disappear.”

This interpretation is further solidified by the fact that the earthly icon or symbol of the Old Covenant was literally burned by fire in A.D. 70 when the Romans destroyed the Temple by burning it with fire.  With the Temple destroyed it was no longer possible to practice the Law of Moses.  Thus in a way the elements of the Law had truly passed away by literal fire as predicted in 2 Peter 3:12.  It should also be noted that Josephus saw the Temple as a symbol or representation of heaven and earth (The Wars of the Jews 3.7).  Thus the destruction of the Temple also signified and marked the destruction of heaven and earth. 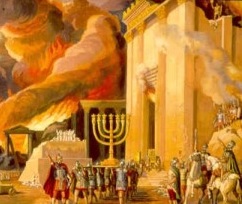 Preterism Explained and Interpreted, A Commentary of 2 Peter 3:7-13: The Prophecies concerning the Destruction of Heaven and Earth in the Prophets, 2 Peter 3 and Revelation are written in an Apocalyptic Style.  Apocalyptic Literature is similar to Poetry and is thus not strictly Literal.

The prophecies concerning the destruction of heaven and earth are written in an apocalyptic style. Apocalyptic literature is poetry. It is not a strictly literal description of events as one might find in a newspaper. In light of this fact, it is not surprising that the sky and earth did not literally pass away after the Jewish War in the same way that the stars in the sky were not literally “dissolved and the heavens rolled up” at the fall of Edom in the sixth century B.C. as prophesied in Isaiah 34:4-5.

It is interesting to note that though the earth and sky were not physically annihilated during the Jewish War, two miracles or omens were recorded in the sky in the first century which seem to have prophetically pointed to the impending destruction of heaven.  The first miracle occurred at the adoption of Nero by Claudius Caesar and the second transpired during Nero’s reign at the start of the Jewish War in A.D. 66. For a description of these miraculous signs and their significance in addition to a detailed explanation of the fulfillment of 2 Peter 3:7-13 in the destruction of heaven and earth in the first century see The Destruction of Heaven and Earth and the New Heaven and Earth Explained!

A Preterist Commentary on 2 Peter 3:5-13: Conclusion

According to the above “A.D. Doctrine” commentary on 2 Peter 3:5-13, the destruction of heaven by fire was fulfilled in the first century as a result of Rome’s scorched earth policy.