An Allegory of the Jewish War in a Surprising Place The Greek myth of Perseus and Andromeda, the story behind the cluster of constellations alluded to in Revelation 12:15-16, is a perfect allegory of the Jewish War with Rome.  It is perhaps not a coincidence that this myth was believed by the Greeks to have taken place in what was then called Philistia, which at the time of the Jewish War was coastal Israel.  In fact, Josephus alludes to this myth during the Roman assault on Israel’s coastal city of Joppa:

Now Joppa is not naturally a haven, for it ends in a rough shore, where all the rest of it is straight, but the two ends bend towards each other, where there are deep precipices and great stones that jut out into the sea, and where the chains wherewith Andromeda was bound have left their footsteps, which attest to the antiquity of that fable.[i]

If one regards Andromeda as the Jewish Christians in Israel, Cassiopeia and the rest of Andromeda’s family as the wicked nation of Israel, Poseidon as Satan, Perseus as Jesus, Cetus as the beast of Revelation under Nero’s leadership, and the head of medusa as the beast of Revelation under Vespasian’s leadership the events in this myth are a stunningly accurate allegory of the Jewish War with Rome.

In this myth, Cassiopeia, representing the wicked nation of Israel, alleges that both she and her daughter, Andromeda, are more beautiful than the Nereids.[ii]  Poseidon, representing the dragon or Satan in this chapter, is enraged and sends a flood, like the one in v. 15, and the sea serpent, Cetus, representing the beast of Revelation, to punish Cassiopeia’s kingdom, Israel.  Floods are a common Biblical metaphor for an invading army;[iii] therefore, this flood represents the Roman army sent by Nero Caesar to attack Israel in A.D. 66.  In order to stop the flood and appease the sea monster, Andromeda is chained to the rocky coast as a sacrifice to Cetus.  Much like Jesus riding his white horse in the clouds during his second coming as pictured in Revelation 19:11, Perseus riding his flying horse Pegasus sees Andromeda chained naked on the coast of Philistia, modern-day Israel, and falls in love with her.  Nakedness is a metaphor for desolation in the Bible.  A few examples of this implicit meaning can be found in Isaiah 20, Lamentations 4:21, Ezekiel 23:29, Hosea 2:3, Nahum 3:5-7, and Habakkuk 2:15-17.   Andromeda’s nakedness represents the slaughter of Christians by their Jewish brethren after Jesus’ resurrection.  Perseus then dives down and beheads Cetus–representing Nero’s death, the beast with the wounded head in Revelation 13:3.  Perseus then kills all of Andromeda’s family by turning then to stone with the head of medusa–representing the kingdom of Rome under Vespasian, the beast ultimately responsible for the complete destruction of Israel.  Then like Christ’s marriage to the church in Revelation 21, Perseus marries Andromeda.[iv] 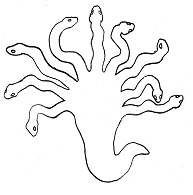 [ii] Cassopia was the Ethiopian queen of Joppa.  Ethiopia did not exist during the original composition of this myth and therefore the original mythographer must have had Nubia in mind.  Nubia is the kingdom at the southern border of Egypt. Perhaps the Jews of Exodus had come from the south of Egypt in what was then Nubia since the ancient kingdoms of Egypt and Nubia where occasionally united as one kingdom?

[iii] The flood of Nahum 1:8 represents the allied armies of the Babylonians, Susianans, Scythians and Medes that had destroyed Nineveh in 612 B.C.  Similar imagery is found in Joel 2:9.  Here an invading army is pictured breaking through a city like a tidal wave: “They rush upon the city; they run along the wall.  They climb into the houses; like thieves they enter through the windows.”