Recall in Dan 2:35 all four metals of the statue representing the succession of empires that conquered Israel from Babylon to Rome were “SHATTERED AT THE SAME TIME” when the rock struck the feet of the statue at the parousia in A.D. 70 though Babylon, Medo-Perisa, Greece and Rome each fell in a geopolitical manner at vastly DIFFERENT times. The fact that all four kingdoms fell at once implies that the fall of these four kingdoms is somehow SPIRITUAL corresponding with the SPIRITUAL reign of the church; the rock that grew into a mountain, the kingdom of God–a spiritual kingdom: “The coming of the kingdom of God is not something that can be observed, nor will people say, ‘Here it is,’ or ‘There it is,’ because the kingdom of God is in your midst.”1 (Lk 17:20-21)  The same spiritual fall mentioned in Dan 2 is also signified in Dan 7:11 when the “beast was slain and its body destroyed and thrown into the fire” at the time in which the kingdom of God (a spiritual kingdom) begins its reign: “‘But the court will sit, and his [the beast’s] power will be taken away and completely destroyed forever.  Then the sovereignty, power and greatness of all the kingdoms under heaven will be handed over to the holy people of the Most High. His kingdom will be an everlasting kingdom, and all rulers will worship and obey him.’ (Dan 7:26-27) This same event is predicted in 2 Th 2:8 “And then the lawless one [the beast who rises out of the Abyss] will be revealed, whom the Lord Jesus will OVERTHROW with the breath of his mouth and DESTROY by the splendor of his coming.”  The lawless one is the beast who rises out of the abyss, Rome embodied by the Caesars of the Flavian Dynasty.  Rev 19:20 also predicts the death and overthrow of the revived Roman Empire and its two figureheads: “But the BEAST was captured, and with it the FALSE PROPHET who had performed the signs on its behalf…The two of them were THROWN ALIVE INTO THE FIERY LAKE OF BURNING SULFUR.”   EVERY one of these vs. concerns the SPIRITUAL fall of Rome (the BEAST) at the institution of the SPIRITUAL REIGN OF THE KINGDOM OF GOD. 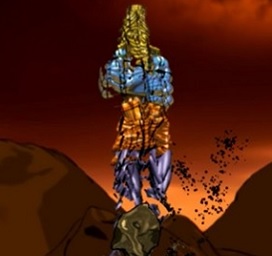 After the rock hits the statue all 4 parts of the statue shatter “ALL AT THE SAME TIME.” (Dan 2:35) This cannot represent the fall of Rome as the other 3 empires did not fall at this time: Babylon fell in 539 B.C., Medo-Persia fell in the 5th century B.C., and Greece began its decline in 323 B.C.

But what about the fact that Titus and Vespasian did not die until long after A.D. 70?  In Revelation, the beast is repeatedly said to die and then rise from the Abyss, the realm of death (Rev 9; 11:7; 13:3; 17:8). Yet the beast dies with Nero, the head with the “fatal” wound, (Rev 13:3) and then rises out of the Abyss (death) with Vespasian. And though the Roman Empire teetered in civil war between the death of Nero and the rise of Vespasian, ROME NEVER ACTUALLY FELL at the time in which it was supposedly DEAD.  If the beast (ROME) is then cast into the “lake of burning sulfur” (Abyss) AGAIN in Rev 19:20, why is this instance suddenly fulfilled in the EARTHLY FALL OF ROME?  Similarly, if the earthly representative of the beast in Rev 19:20, Vespasian, and the false prophet, Titus, are said to RISE OUT OF THE ABYSS (Rev 9, 11:7; 17:8) and yet NEVER PHYSICALLY ROSE FROM THE DEAD, when both men are CAST BACK INTO THE ABYSS in Rev 19:20 should we NOW assume they must PHYSICALLY DIE in A.D. 70?

Events on earth mirror events in heaven and the Abyss (like “sea,” “flood,” “waters”) is a symbol of Gentile nations (see In the Bible “Earth” Signifies the Specific Land Addressed While “Sea” Symbolizes Foreign Nations) and the realm of the dead concurrently (The Poetic Biblical Link Between “Sea” and “Abyss”).  Thus the casting of the beast and the false prophet “ALIVE” (did you catch that?) into the Abyss/lake of fire in Rev 19:20 is fulfilled in both the departure of Vespasian and Titus ALIVE to Rome (the “sea”/ “Abyss”) at the end of the Jewish War in A.D. 70 as well as in the casting of the spirit forces of evil in heaven (Eph 6:12) who are behind their acts to the realm of death, the Abyss, at the same time in fulfillment of Is 24:21: “In that day the LORD will punish the powers in the heavens above and the kings on the earth below.” Duncan McKenzie believed that the Antichrist and the Lawless One is ultimately a satanic spiritual power.2  It is this demonic ruler or rulers who is the Lawless One and the Antichrist and it is this angelic being or beings who is or are “overthrown” and “destroyed” (2 Thessalonians 2:8) at the Parousia, not the individual person or people they work through behind the scenes like Titus and Vespasian.  Revelation 16:13-14 reads, “Then I saw three impure SPIRITS that looked like frogs; come out of the mouth of the dragon, out of the mouth of the BEAST and out of the mouth of the FALSE PROPHET. They are DEMONIC SPIRITS that perform signs[.]”  I believe it is these two spirits behind the beast and the false prophet who are cast into Hades in A.D. 70.

In Revelation 12:3-4 a red dragon (Satan) casts a third of the stars or angels out of heaven.  This dragon then works through Herod and tries to kill the Messiah when He is born.  Afterwards the dragon then manifests itself as the seven-headed sea beast of Revelation signifying Rome and its Caesars. In Revelation 13 Caesar/Rome is pictured as SATAN and his kingdom which is ALREADY depicted as a 7-headed dragon in HEAVEN in Revelation 12:3. The fact that Satan (the dragon) first manifests as Herod trying to kill the Messiah, then as Caesar (two different individuals) shows that there is ULTIMATELY A SPIRITUAL FORCE BEHIND THESE TWO DIFFERENT individuals.

2 Thessalonians 2:7 refers to “the secret POWER of lawlessness” as though it were a spirit or spiritual force as well as referring to the coming of this figure by “THE ACTIVITY OF SATAN.”  The same can be said concerning “Antichrist:” “By this you know the Spirit of God: every spirit that confesses that Jesus Christ has come in the flesh is from God; and every spirit that does not confess Jesus is not from God; this is THE SPIRIT OF THE ANTICHRIST, of which you have heard that it is coming, and now it is already in the world.”  In 1 John 4:2-3 the Holy Spirit is contrasted with the spirit of the antichrist as if opposites.  1 John 2:18 and 2 John 7 mention many (little) “antichrists” in contrast to the true ANTICHRIST (singular) who is behind them:

“For many deceivers [plural] have gone out into the world, those who do not acknowledge Jesus Christ as coming in the flesh. This is the deceiver [singular] and the antichrist [singular].”  [Emphasis mine.] (2 John 7)

In Isaiah 14, Isaiah is told to “take up this taunt against the king of Babylon.” (v. 3) to which this earthly king is depicted as a demonic king cast out of heaven:

“How YOU HAVE FALLEN FROM HEAVEN, MORNING STAR, son of the dawn! YOU HAVE BEEN CAST DOWN TO THE EARTH, you who once laid low the nations! You said in your heart, “I WILL ASCEND TO THE HEAVENS; I WILL RAISE MY THRONE ABOVE THE STARS OF GOD; I will sit enthroned on the mount of assembly, on the utmost heights of Mount Zaphon. I will ascend above the tops of the clouds; I WILL MAKE MYSELF LIKE THE MOST HIGH.” (Is 14:12-14)

Antiochus Epiphanies is also depicted as a demonic power:

Out of one of them came another horn, which started small but grew in power to the south and to the east and toward the Beautiful Land. It grew until IT REACHED THE HOST OF THE HEAVENS, AND IT THREW SOME OF THE STARRY HOST DOWN TO THE EARTH and trampled on them.  IT SET ITELF UP TO BE AS GREAT AS THE COMMANDER OF THE ARMY OF THE LORD. (Dan 8:9-11)

The commander of the army of the Lord is an angel (Josh 5:13-15) called Michael in Rev 12:7.  Here we see again how an angelic power is again behind and poetically fused with another human king. Daniel 8:9-11 cited above is especially worth mentioning as this is a prophecy concerning the little horn.  Here we see that the little horn is truly a demonic being. And if the little horn of Daniel 8 is truly a demon, what does that imply concerning the little horn in Daniel 7.  And if the little horn of Daniel 7 is said to be cast into the lake of fire in A.D. 70 (Daniel 7:11), does this not imply that it is this spiritual figure that is cast into the Abyss at this time? Must Titus, its human reflection or host, necessarily also die in A.D. 70?

Interestingly, Titus, the little horn of Daniel 7, is conflated again with a demonic being in Revelation 9.  Here Titus is called “the angel of the Abyss” in Revelation 9:11: “They had as king over them the ANGEL OF THE ABYSS, whose name in Hebrew is Abaddon and in Greek is APOLLYON.”  Apollyon is a play-on-words for “Apollo” and “Destroyer.”  Before being promoted to general over all the legions in Judaea at the siege of Jerusalem in A.D. 70, Titus was the general of Legio XV Apollinaris (the 15th Apollonian Legion).  Thus Apollyon is an apt title for Titus who was general of the 15th Apollonian Legion before destroying Jerusalem and its temple in A.D. 70 (see Revelation 9: A Preterist Commentary–Who is Apollyon?). Just as the king of the Seleucids (Dan 8:9-11), Babylon (Is 14:12-14) and Tyre (Ez 28) are all ultimately fused with their corresponding angelic authority, so too is Titus, the “angel of the Abyss.”  Interestingly, the same thing is said concerning Nero who is “identified with Belial [Satan] in some early Jewish literature” like the Sibylline Oracles 3.63-74 and Ascension of Isaiah 4:1-14.3

Daniel 4:26 reads, “[Y]our kingdom [Babylonian Empire] will be restored to you when you acknowledge that Heaven rules.” All authority including that of the four empires of Daniel 2 comes from heaven.  Eph 6:12 reads, “[O]ur struggle is NOT against FLESH AND BLOOD, but against the rulers, against the authorities, against the powers of this dark world and AGAINST THE SPIRITUAL FORCES OF EVIL IN THE HEAVENLY REALMS.” It is the reign of these wicked angelic rulers behind these 4 human empires which is denoted by the statue of Daniel 2. And it is the overthrow of their reign and their personal destruction in A.D. 70 that is symbolized by the shattering of ALL FOUR METALS of the statue AT THE SAME TIME (Dan 2:35) at the coming of Christ’s reign in HEAVEN:

The great dragon was hurled down—that ancient serpent called the devil, or Satan…. He was hurled to the earth, and his angels with him. Then I heard a loud voice in heaven say: “NOW HAS COME the salvation and the power AND KINGDOM OF OUR GOD, AND THE AUTHORITY OF HIS MESSIAH. (Rev 12:9-10)

It is the destruction of these wicked angelic rulers and their reign of wickedness in heaven (Eph 6:12) that is destroyed and overthrown in A.D. 70, not the fall of Rome (the earthly reflection of their heavenly kingdom) or the Caesars (their earthly shadows). After all “our struggle is not against flesh and blood” but “against the spiritual forces of evil in the heavenly realms.” (Eph 6:12)