A Preterist Commentary on Hebrews 9:7-8: Summary and Highlights

Hebrews 9:7-8 says that “the way into the Most Holy Place was not disclosed as long as the first tabernacle was still standing.”  The part of the Temple called the Most Holy Place is an earthly symbol of heaven (Heb. 9:24). This v. implies that the way to heaven would not be accessible until the destruction of the Temple in A.D. 70, at the last trumpet.  This v. has added symbolic significance also pointing to A.D. 70. The first tabernacle or temple of v. 8 represents the Body of Christ which is Jesus and the saints.  Thus the way to heaven would also not be accessible until the full number of saints had been martyred as stated in Revelation 6:9-11. 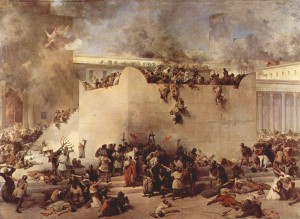 The siege of Jerusalem in A.D. 70. Hayez, Francesco. The Destruction of the Temple of Jerusalem. 1867. Galleria d’Arte Moderna, Venice.

7But only the high priest entered the inner room [of the Temple], and that only once a year, and never without blood, which he offered for himself and for the sins the people had committed in ignorance.  8The Holy Spirit was showing by this that the way into the Most Holy Place had not yet been disclosed as long as the first tabernacle was still standing.

Hebrews 9:7-8 Commentary: Through Jesus’ Atoning Death and Resurrection the Way to Heaven, the Most Holy Place, is now Accessible.

According to John 2:21, the Temple is the Body of Christ.  The Most Holy Place is heaven: “For Christ did not enter a man-made sanctuary that was only a copy of the true one [the Most Holy Place], he entered heaven itself, now to appear for us in God’s presence (Hebrews 9:24).”  Therefore, part of what is suggested in v. 8 is that it is not possible to enter heaven while Jesus, the Temple, is still alive and present on earth.  It is only through Jesus’ atoning death and resurrection that the way to heaven, the Most Holy Place, is now accessible to His people.  However, there is more to the meaning of v. 8 than what has been stated above.

Hebrews 9:7-8 Commentary: Many Spirits were confined to Sheol prior to the Resurrection.

Hebrews 9:7-8 Commentary: Spirits were to enter Heaven at the Last Trumpet.   The Last Trumpet was sounded at the Siege of Jerusalem in A.D. 70. A Covenant Eschatology Exposition and Commentary of Hebrews 9:7-8: Verse 8 suggests that as long as the Temple still stands, it is not possible to enter Heaven, the Most Holy Place.  The Destruction of the Temple in A.D. 70 after the Last Trumpet Marked the Resurrection of the Saints to Heaven.

Four months after the Romans began their attack on Jerusalem at the seventh and last trumpet, the Temple was destroyed.   Remember that according to 1 Corinthians 15:51-52, the resurrection is expected to occur at the seventh and last trumpet.  That being said, there is another layer of meaning to v. 8: “[T]he way into the Most Holy Place had not yet been disclosed as long as the first tabernacle was still standing.”  This verse suggests that as long as the Temple in Jerusalem still stands, it is not possible to enter heaven, the Most Holy Place.  Thus in light of v. 8 it is perhaps not surprising that the destruction of the Temple in A.D. 70 as a result of the sounding of the seventh trumpet marked the resurrection of the saints to the heaven, the Most Holy Place.

The fact that the resurrection occurs at the destruction of the Temple is highly symbolic.  The Temple does not just represent Jesus, it also represents His people: “Don’t you know that you yourselves are God’s temple and that God’s Spirit lives in you?” (1 Corinthians 3:16.)  Thus verse 8 also allegorically states that heaven would not be opened to the saints until the full number of the saints, the Body of Christ, had been martyred as is explicitly stated in Revelation 6:9-11.  And since the Temple represents the saints, Hebrews 9:8 also implies the obvious fact that no one can enter heaven until his or her earthly body or temple is destroyed.  This fact is explicitly stated in 1 Corinthians 15:35-40:

But someone will say, “How are the dead raised? And with what kind of body do they come?” You fool! That which you sow does not come to life unless it dies; and that which you sow, you do not sow the body which is to be, but a bare grain, perhaps of wheat or of something else. But God gives it a body just as He wished, and to each of the seeds a body of its own. All flesh is not the same flesh, but there is one flesh of men, and another flesh of beasts, and another flesh of birds, and another of fish. There are also heavenly bodies and earthly bodies, but the glory of the heavenly is one, and the glory of the earthly is another.

For a more detailed explanation of the resurrection see How the Resurrection Bodies of the Saints Perfectly Mirror Jesus’ Resurrection Body after His Ascension Into Heaven Fulfilling Philippians 3:20-21 and ALL Other Bible Verses on the Resurrection!!! and The Notion that the Resurrection is an Earthly Phenomenon whereby the Dead are raised as Perfected, Eternal Earthly Bodies is dispelled by 1 Corinthians 15:35-50 and Isaiah 65:20. 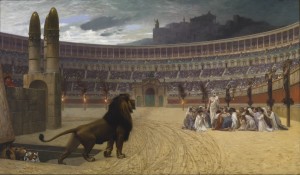 Hebrews 9:7-8 Commentary: The Saints could not enter Heaven until “the Number of Their Fellow Servants and Brothers Who were to be killed as They had been was Completed.”  The Temple represents the Body of Christ. After the Temple fell, a Physical Sign of the Martyred Saints, the Church could finally enter Heaven.

It should also be noted that since, as stated in 1 Corinthians 3:16, the Temple represents the saints, the fall of the Temple in Jerusalem in A.D. 70 is thus a tragic symbol of the deaths of the holy martyrs.  Revelation 6:9-11 indicates that the saints could not enter heaven until “the number of their fellow servants and brothers who were to be killed as they had been was completed.”  Acts 8:1-3; 12:1-4; and 26:10 record the persecution the early church faced in Jerusalem soon after the death of Jesus.  After the full number of believers had been executed, the Temple representing these people fell as an incorporeal manifestation of their deaths.

A Full Preterist View and Commentary of Hebrews 9:7-8: Confirming that the Resurrection has already occurred, many Near-Death Experiences testify that Spirits enter Heaven immediately after Death.

Assuming that the resurrection at the last trumpet has already occurred, is there any evidence from near-death experiences that people now resurrect immediately after death as is implied in 1 Corinthians 15:51-52?  Yes.  Many people who have miraculously survived clinical death often describe experiencing a beautiful afterlife.  After a snowboarding accident, one survivor of clinical death recounted something very much like Paul’s description of the resurrection in 1 Thessalonians 4:16-17.2  This young man is recorded to have said:

I recall in some of the most vivid detail that I was floating above the main sky lodge.  It seemed like I was in a helicopter about 50-70 feet above the ground just hovering.  There was either no noise or total silence.  But I remember I could feel the warmth of the sun, but it wasn’t the sun it was much brighter and hurt to look directly at.3 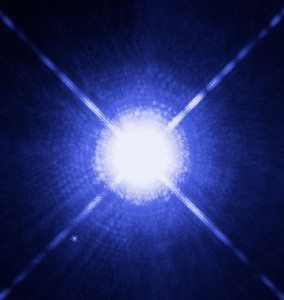 Reports of floating up to heaven after clinical death are an exceedingly common near-death experience.  Could this be the resurrection referred to by Paul in 1 Thessalonians 4:16-17?  The above near-death experience is one of many examples in which people describe floating up to meet a loving light in the sky after suffering clinical death.  In 1 Thessalonians 4:16-17, Paul says that at the resurrection spirits will rise up to meet Christ in the sky.  Is this light Jesus?

Often throughout the New Testament, Jesus identifies himself as the light of the world.  Furthermore, in Acts 9 Paul is said to have encountered the resurrected Christ on his way to Damascus.  Reporting this encounter, Luke writes, “As he [Paul] neared Damascus on his journey, suddenly a light from heaven flashed around him (Acts 9:3).”  This depiction of Christ as “a light from heaven” bears a striking resemblance to the light many people witness after surviving clinical death.  In light of the Biblical similarities, it is not surprising that many people who have had near-death experiences identify the light as Jesus.

Interested in PRETERISM or are you a PRETERIST struggling with a prophecy or verse?  It DID happen just like the Bible says!  If you liked this essay, see PRETERIST BIBLE COMMENTARY for a detailed explanation of the FULFILLMENT OF ALL MAJOR END TIME PROPHECIES IN THE BIBLE. The more unbelievable the prophecy, the more amazing and miraculous the fulfillment!

A Preterist Commentary on Hebrews 9:7-8: Conclusion

Hebrews 9:7-8 was fulfilled in A.D. 70 when the Romans destroyed Herod’s Temple.  This event marked the resurrection of the dead as is evidenced by NDE’s and Roman history.

A Preterist Commentary on Hebrews 9:7-8