A Preterist Interpretation, Exposition and Commentary of Zechariah 12: Zechariah 12 was fulfilled during the Maccabean Wars of the Second Century B.C.

The previous chapter, Zechariah 12, was fulfilled in the Maccabean Wars of the second century B.C. At this time Jerusalem was attacked by the Seleucids under Antiochus Epiphanies and the Temple was desecrated and sacrifices ceased. Explicitly fulfilling Zechariah 12:3, 2 Maccabees 8:9 says that the Seleucid army that attacked Jerusalem during the Maccabean Wars consisted of Gentiles from “all the nations.” After the Seleucids assaulted Jerusalem and desecrated the Temple, many of the Jews revolted under the leadership of the Maccabees. The Maccabees rescued Jerusalem and returned the city to those loyal to God and attacked and conquered cities loyal to the Greeks throughout Judah in addition to much of the territory of the surrounding nations in fulfillment of Zechariah 12:1-6. 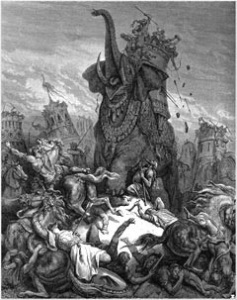 In fulfillment of Zechariah 14:2, 2 Maccabees 8:9 says that the Seleucid army that attacked the Maccabees during the Maccabean Wars consisted of Gentiles from “all the nations.”

Zechariah 12:8 says that God would defend the people of Jerusalem “and the house of David will be like God, like the angel of the LORD before them.” In fulfillment of v. 8, the Jewish rebels led by the Maccabees won nearly every battle they fought throughout this war. The fact that God fought for the Jews against their Gentile enemies during the Maccabean Wars is explicitly stated in 2 Maccabees 11:13 and 15:8. Illustrating this idea angelic warriors from heaven are said to have appeared to protect the Jews and defeat their enemies in 2 Maccabees 3:24-34; 10:29-31; and 11:8. Interestingly, in explicit fulfillment of Zechariah 12:8 what appears to be the angel of the LORD did, in fact, charge before the Jews in battle in 2 Maccabees 11:8-11:

And as they were at Jerusalem, there appeared before them on horseback one in white clothing, shaking his armour of gold. Then they praised the merciful God all together, and took heart, insomuch that they were ready not only to fight with men, but with most cruel beasts, and to pierce through walls of iron. Thus they marched forward in their armour, having an helper from heaven: for the Lord was merciful unto them. And giving a charge upon their enemies like lions, they slew eleven thousand footmen, and sixteen hundred horsemen, and put all the other to flight.

In line with the Lord’s protection of His people, Zechariah 12:4 says that God will strike the enemies of His people with madness.  2 Maccabees seems to record the fulfillment of this verse in 2 Maccabees 12:22.

The mourning predicted in Zechariah 12:10-14 seems to have been fulfilled throughout the course of the Maccabean Wars especially in the great slaughter in Jerusalem at the start of the war when Antiochus Epiphanies took the city, seized the Temple, desecrated it and put a stop to the practice of the Law.

1“On that day a fountain will be opened to the house of David and the inhabitants of Jerusalem, to cleanse them from sin and impurity.

Zechariah 13:1 opens with the expression “[o]n that day” implying that this chapter, like the previous one, is also fulfilled in the Maccabean Wars of the second century B.C. Though Zechariah 13 appears to have been fulfilled in the second century B.C. it has elements that typologically point to Jesus Christ and perhaps also to the Jewish War of the first century A.D. See The Typological Elements of Zechariah 13 in the First Century.

Of course Zechariah 13 is a prophecy.  Because this chapter is a prophecy that has elements that appears to be ultimately fulfilled in Jesus Christ, this fact does not prove that Zechariah 13 as a whole was to be fulfilled in the first century.  There are many examples of prophecies that were fulfilled before Christ that were ultimately fulfilled typologically in Christ.  For example, the virgin who was to conceive in Isaiah 7:14-16 was fulfilled immediately thereafter in Isaiah 8:3.  Though Isaiah 7:14 had an immediate fulfillment in Isaiah 8:3, the fact that the virgin was to conceive and give birth to a son typologically pointed to Christ as also appears to be the case in Zechariah 13:1.

A similar example of an Old Testament prophecy with typological elements is the prediction of the fall of Babylon in Isaiah 13.  This prophecy was fulfilled when ancient Babylon fell to the Medes in the sixth century B.C. (Isaiah 13:17).   Though this oracle was fulfilled in the sixth century B.C. it has typological elements that also point to the fall of Babylon predicted in Revelation 18.

Zechariah 13:1 appears to refer to the reconsecration of the Temple by the Jews after its three-year desecration by the Seleucids when sacrifices to the Lord ceased and pagan idols were erected and worshiped therein.  This fountain in v. 1 that cleanses from sin is also mentioned in Ezekiel 37 and as implied by its immediate context (Ezekiel 36) was fulfilled in the construction of the second Temple.  In Jeremiah 2:13 God is called “the fountain of living waters.”  With the reconsecration of the Temple and the reinstitution of animal sacrifices as sin offerings the Spirit of the Lord was presumed to have resettled in the Holy of Holies explaining how a fountain is opened in Jerusalem to cleanse from sin and impurity in v. 1.  Zechariah 13:1 is Temple and Temple sacrifice imagery and the reason it seems so applicable to New Testament times is because the Church becomes the new Temple of God and each Christian receives the Spirit of God just as was said to occupy the Holy of Holies during the Old Covenant.  And the fact that this New Temple of God, the Church, receives forgiveness of sins as indicated in v. 1 points originally to the sin offerings of the Temple reinstituted by the Maccabees in the second century B.C.

2“On that day, I will banish the names of the idols from the land, and they will be remembered no more,” declares the LORD Almighty. Fulfilled! A Full Preterist View and Commentary of Zechariah 13:2: During the Maccabean Wars, the Maccabees attacked and slaughtered the Inhabitants of those Cities in Israel populated Largely by Greeks and Hellenized Jews worshipping Greek Gods.

“I will remove both the prophets and the spirit of impurity from the land. 3And if anyone still prophesies, his father and mother, to whom he was born, will say to him, ‘You must die, because you have told lies in the LORD’s name.’ When he prophesies, his own parents will stab him. 4“On that day every prophet will be ashamed of his prophetic vision. He will not put on a prophet’s garment of hair in order to deceive. 5He will say, ‘I am not a prophet. I am a farmer; the land has been my livelihood since my youth. 6If someone asks him, ‘What are these wounds on your body?’ he will answer, ‘The wounds I was given at the house of my friends.’

Fulfilled! The “A.D. 70 Doctrine” View, Interpretation, Exposition and Commentary of Zechariah 13:2-6: 1 Maccabees 4:46; 9:27; and 14:47 indicate that there were No Trustworthy Prophets during the Maccabean Wars.

In fulfillment of Zechariah 14:2-6 there were no prophets during the Maccabean Wars—certainly no “reliable” ones. 1 Maccabees 9:27 reads, “So there was great distress in Israel, such as had not been since the time that prophets ceased to appear among them [emphasis mine].” This fact is echoed in 1 Maccabees 4:46; and 14:41.

7 “Awake, O sword, against my shepherd, against the man who is close to me!” declares the LORD Almighty. “Strike the shepherd, and the sheep will be scattered, and I will turn my hand against the little ones. 8 In the whole land,” declares the LORD, “two-thirds will be struck down and perish; yet one-third will be left in it. 9 This third I will bring into the fire; I will refine them like silver and test them like gold. They will call on my name and I will answer them; I will say, ‘They are my people,’ and they will say, ‘The LORD is our God.’ “ 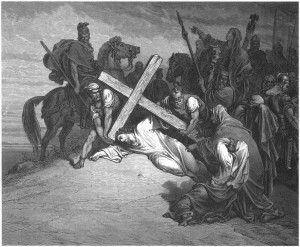 Dore, Gustave. The Arrival at Calvary

Fulfilled! “Hyper Preterism” and Zechariah 13:7: After the Death of Judas Maccabees Who was a Type of Christ, the Jewish Resistance was Scattered and Sought Out for Vengeance.

Fulfilled! A Covenant Eschatology Interpretation and Commentary of Zechariah 13:8-9: After the Death of Judas Maccabees Who was a Type of Christ, the Jewish Resistance was Scattered and Sought Out for Vengeance.

Verses 8 and 9 indicate that two-thirds of those in Judah or Israel were to be killed. This number may not be an exaggeration. Recall that as stated above, the Maccabean Wars was not just a war between the Maccabees and the Greeks, it was also a civil war between those Jews loyal to the God of Israel and those Jews who had adopted the religion and culture of the Greeks. Because the Maccabean Wars was a civil war, this death toll does not seem wildly impractical in light of the battles recorded in the Books of Maccabees.

**NOTE** This is a BRAND NEW website.  If you liked this article, tell Google by clicking on the “g+1” icon at the top right corner of the page.  Also like us on Facebook and follow on Twitter for updates on new evidence!